In a break with tradition we've had a holiday.The public don't expect publicans to have holidays. I can only imagine the verbal abuse the staff will have fielded due to no food being available in Chef's absence.
You'd be surprised at how many people will embark on two hour round trip for a bowl of chips and a cheddar sarnie and how angry they are when they can't get them..

I've been encouraged however,to discover that wherever you go the poor hospitality worker appears to encounter the same ineptitude and buffoon like behaviour..
It was a Monday lunchtime in October when we ignored our own best advice and tipped up without an appointment at this atmospheric little place. 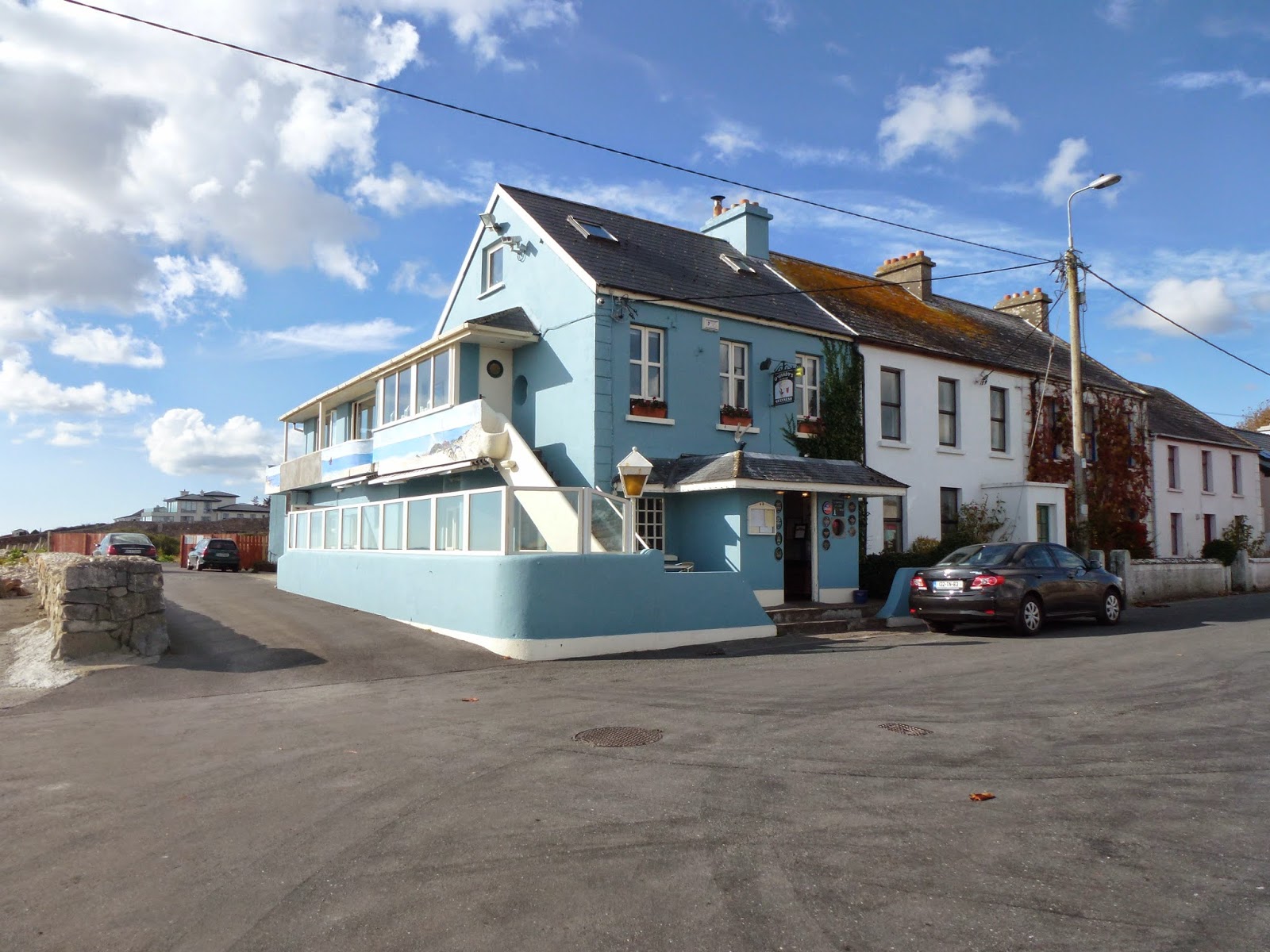 At 12.30 there were already three tables taken but Chef's eyes alighted on a prime viewing spot by the window and was already steaming over there to seize possession when the lone waiter intervened.
'I'm sorry Sir but that table is booked'

Of course it fucking is,what the hell planet are we on ?
Idiot.
The very pleasant young man directed us to a less attractively located table,you know,one of the ones you don't dare book out because they're next to the netty door or the coffee machine (which always comes in quite handy as you can unexpectedly bang the coffee knock out draw with the force of a young Arnold Swarzenegger in the case of any awkward customer being seated next to it..its great watching them flinch like they've been shot by a sniper..)
Anyhoo.
Due to my extensive experience of belligerent customers and equally feeling embarrassed by Chefs faux pas (he should know better) I overcompensated and made a huge show of not being an awkward customer.
'Thats perfect,yes thats a lovely table we'd love to sit there'
I gave Chef a swift warning kick on the shin and he obligingly flashed his best rictus grin.
The poor lad looked a bit shifty and averted his eyes in embarrassment.
Which was no surprise really, as it had been over a week since I'd made eye contact with another human being due to the Mother of all Cold Sores which had taken up residence on my lower lip.
By now it was at the shrivelling stage and looked like I'd blu tacked a plump California raisin to my lip. To make matters worse I'd daubed Sudocrem(*cough*as we all know this clears up ANYTHING..) on the atrocity, giving the effect of a MOULDY California raisin.
It was indeed an eye catching display.
On the plus side I was feeling slightly more at ease as nobody knew me.

A predominately seafood restaurant might seem an ill advised choice given Chef's fish allergy but I'd already checked on line that there'd be something he could eat and was set on a nice plate of oysters and a glass of champagne for me lunch.
The restaurant was cosy,with eight tables in a compact space.
We'd already noted an upstairs seating area with windows overlooking the bay but clearly at lunchtime in October and with only one person working the tables it made sense to keep everyone downstairs.
Yes oddly one does need to make a profit.
Presently, I noticed a particularly flashy car pull up outside.
A couple entered the room.I could tell straight away they were Americans due to their huge blow dries and statement horsey teeth.American teeth are fifty per cent bigger than English teeth and one hundred per cent whiter.
Seconds later the wives followed in behind.
There seem to be a lot of Americans visiting Ireland at this time of year.Probably third or fourth generation emigrants visiting the homeland.The American demeanour  bears no resemblance to that of your average Irish person. With the exception of two places visited we witnessed a complaint from a cuz stateside every night.
Every single night.
And as with all things American, the American complaint is also exponentially bigger.

Apologies if this offends any polite and easy mannered American but this lot had a sense of entitlement and superiority that causes an interaction which should be an enquiry to come out as a statement of fact:
'You have an upstairs seating area?We'll sit upstairs,so we can enjoy the views'
Will you indeed..
My ears pricked up immediately,I wondered how the very pleasant young man might deal with this.
'Yes Sir we do but I'm afraid its not open at lunchtime,I can offer you this table here'
I glanced at the table right next the the front door and knew straight away they wouldn't be happy with being sidelined, they were definitely centre stage material.
They didn't go for it.
There followed an heated interaction some of which I couldn't quite catch,but I could see they were digging their heels in.
Finally in a loud voice I heard the threat 'Well buddy, we'll come back when the upstairs seating are IS open'
They stood there expectantly thinking they'd played the trump card.Customers quite often overestimate how desperate you are for their cash.
'Ok Sir sorry about that'
BRAVO.
The waiter tried to push a business card their way as they stormed out of the door.
'He should have sent the fuckers up there and and forgotten about them' said Chef,'I don't fancy their chances finding somewhere round here as nice as this on a Monday lunchtime'
'Well they always have the mini bar in the hotel room to fall back on..'
'They didn't look the sort to be sated by a packet of Pringles and a seed bar' said Chef smirking..

Just then our meals arrived.
'Oh look' said Chef 'the sauce for your salad is in an oyster shell'
I was just thinking what a nice idea this was when as fate would have it,the waiter went to put down the salad and the dressing was sadly no longer in the oyster shell but all over the table.


"I'm sorry Madam I'll get that changed for you'
'No its fine,don't worry'
I grabbed at the plate.
He tried to take the plate again, but again I grabbed it and made him put it down,determined not to be a difficult customer.
Reader,I was practically licking the salad dressing from the table top.
'I don't know why you didn't just let him change it?' said Chef with an eye roll…
Minutes later the waiter returned with some blue centre feed roll to mop up the mess.
It would probablyhave been easier all round if I'd allowed him to change it,but still, I win, I'd proved I wasn't a difficult customer.
After I'd downed half a dozen oysters, a delicious crab salad and had polished off two lovely glasses of house champagne I was still a bit thirsty so went to have a quick swig of Chef's finest lager.
I was stopped mid track.
'Are you intent on killing me?' said Chef
'Eh?'
Just then I remembered the infectious abomination on me lower lip.
'Oh yes, of course I shouldn't be drinking out of the same glass in case you catch it'
'Jesus,the cold sore is the last of me worries,you've downed enough bloody seafood to bump me off….'

After lunch and a pleasant stroll along the seashore we headed back to our lodgings as Chef had promised himself an afternoon snooze prior to the evening festivities.
When his alarm sounded a short hour after his head hit the very cosy 300 thread count Egyptian cotton pillowcase,I enquired had he enjoyed his repose.
'Well no, not really..'
Why?
Well,what was all that noise??'
'Oh.Sorry. I was having a look in the drawers and I pulled that one right out and the coffee stuff fell on the floor and I couldn't get the drawer back in and then I tripped over your walking boots and fell flat on the floor..'
Just your average afternoon then.
'No not that racket.Did you have the shits?'
What?? (indignantly)
'Sounded like gurgling and then the toilet roll spinning round.I thought you had the shits'
'Oh THAT noise..' (splutter) 'I found a coffee percolator in the wardrobe and I thought I'd brew up..'

And that was only the first day of the holiday...

You know what I’m unexpectedly missing in this weirdest of all runs up to Christmas? The drop ins from friends ,family, suppliers, custom...

All characters portrayed in this blog are fictitious,any resemblance to persons living or dead is purely coincidental.
Please don't reproduce any text or pictures without asking my permission first.
All rights are reserved.